Read the new post by Oded Cohen on tocexpert.com

Some TOC practitioners have the perception that Buffers in TOC are there just to absorb variability. This is partially true but it is not the full picture, and this does not explain the difference between the meaning of the ‘TOC buffers’ and the conventional ‘buffers’.

The TOCICO dictionary states that: “buffer – Protection against uncertainty. The protection is aggregated and may take the form of time, stock (inventory), capacity, space or money.  Buffers are strategically located to protect the system from disruption.”

Actually, the above definition is true for any protection mechanism that was inserted into major conventional managerial systems as early as the 1950s and onward. 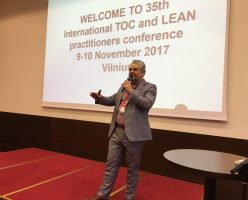 John Covington: Management Attention – a key constraint or something deep...
Scroll to top